Alpha Centauri is the 34th Celestial Body and the 3rd Star obtained in The Beyond Bubble Universe, which can generate Stardust.

"Alpha Centauri is the closest solar system to our own. 4.37 light years from our Sun, it consists of three stars and at least two exoplanets."

"When two stars orbit together around a common center of mass, it is called a binary star system. They are often the nuclei of planetary nebula, and can exchange mass with each other to grow past the evolutionary stages of standard single stars."

"Solar analogs are stars that are similar in size, shape, composition, and behavior to Earth's sun Sol. By studying these comparable stars, we are able to learn more about Sol. These stars may also provide conditions necessary for extraterrestial life."

In 2021, a candidate exoplanet named Candidate 1 (abbreviated as C1) was detected around Alpha Centauri A, thought to orbit at approximately 1.1 AU with a period of about one year, and to have a mass between that of Neptune and one-half that of Saturn, though it may be a dust disk or an artifact. Should this candidate be confirmed at some point, it will probably get the designation "Alpha Centauri Ab".

A possible transit of a seperate exoplanet in 2013 has been observed. This planet would most likely orbit Alpha Centauri B with an orbital period of 20.4 days or less, with only a 5% chance of it having a longer orbit. The median of the likely orbits is 12.4 days. It likely has lakes of molten lava and would be far too close to Alpha Centauri B to harbour life. Should this candidate be confirmed at some point, it will probably get the designation "Alpha Centauri Bc".

"Although Alpha Centauri is the closest star system to our own, with our current spacecraft technology, it would still take us 50,000 years to journey to this alien star."

"Because it is one of the brightest stars in Earth's sky, Alpha Centauri has been featured in many mythologies through the ages. The Ancient Egyptians, Ancient Chinese, and Indigenous Australians all included this star in their legends." 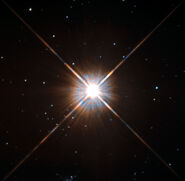