Cell to Singularity Wiki
Register
Don't have an account?
Sign In
Advertisement
in: Beyond, Celestial Body, Asteroid, Stardust-Generator
English

The Asteroid Belt is the 7th Celestial Body and the 1st Asteroid obtained in The Beyond Bubble Universe, which can generate Stardust.

"The Asteroid Belt is a field of small, rocky bodies floating in the space between Mars and Jupiter. Jupiter's immense gravity prevents these asteroids from coming together to form a planet, keeping them in a scattered orbit."

"C-type asteroids are the most common type of asteroids. Dark in appearance, they are made up of mostly rocks and minerals with a high concentration of carbon."

"S-type asteroids contain a high amount of iron and magnesium silicates. They are the second most common type of asteroid."

"Asteroids are rocky bodies that orbit the Sun, most frequently created from the impact between celestial bodies. They form the Asteroid Belt between Mars and Jupiter and the Kuiper Belt beyond Neptune."

The Asteroid Belt contains millions asteroids of which hundreds of thousands are currently known. The four largest asteroids are Ceres, Vesta, Pallas, and Hygiea.

"There are over 100,000 known objects in the asteroid belt. These range from the dwarf planet Ceres to tiny particles of dust. Most objects in the belt are boulder sized."

"While the asteroid belt is often pictured as crowded, in reality the asteroids are quite far apart. Most exploratory craft sent to the area have navigated it easily, and the chances of a collision are calculated to be less than one in a billion."

Overview Images of the Asteroid Belt[] 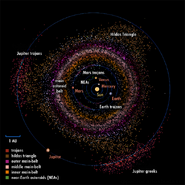 A linear overview of the Inner Solar System bodies