Callisto is the 14th Celestial Body and the 5th Moon obtained in The Beyond Bubble Universe, which can generate Stardust.

"Callisto, the fourth Galilean moon, has a heavily cratered surface. It is the only one of the Galilean moons not exposed to high levels of radiation, making it a possible candidate for future human settlement."

"At 4.5 billion years old, Callisto is one of the most ancient objects in the solar system. It has borne the burnt of many impacts from other celestial bodies over its lifetime. The surface of this moon is almost entirely covered in craters."

"Callisto's distance from Jupiter means that it receives less radiation than the other Jovian moons. Its orbit outside of Jupiter's radiation belt could make it safer for human exploration than many other moons in this system."

"Callisto is famous for its heavily cratered surface. The largest of these is a multi-ringed basin called Valhalla, which is more than 1,800 km wide. This huge crater was the result of an impact that may have happened four billion years ago."

"Some scientists think that if Jupiter had continued to grow during its formation, it might have started nuclear fusion and become a star. This would have turned our solar system into a binary system, and Jupiter's moons into planets." 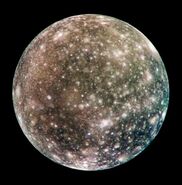