Enceladus is the 17th Celestial Body and the 7th Moon obtained in The Beyond Bubble Universe, which can generate Stardust.

"Enceladus has an icy, highly reflective surface. It is covered in geysers, hinting at hydrothermal activity or even an ocean that could harbor nutrients an organic molecules."

"Albedo is a measure of the solar reflectivity of a celestial object's surface. Objects with a high albedo appear brighter. Enceladus's icy surface gives it a very high albedo, but its closeness to the even brighter rings of Saturn can make it hard to spot."

"The E Ring is the widest and outermost ring of Saturn. Enceladus orbits inside this ring, and plumes of material from the moon may be a main source of the particulates that form the ring ring itself."

"The moons of Saturn are named after Titans from Greco-Roman mythology. Only 53 of the (at least) 62 moons orbiting Saturn have names, while the rest have been given numerical designations."

"There are more than 80 geysers on the south pole of Enceladus. These geysers are evidence that Enceladus may be the most volcanically active moon in the solar system." 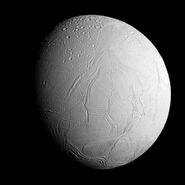