Europa is the 12th Celestial Body and the 3rd Moon obtained in The Beyond Bubble Universe, which can generate Stardust.

"Europa has the smoothest surface of any solid object in the solar system, evidence of a possible liquid ocean under its surface. Combined with its thin oxygen atmosphere, this suggests that there may be microscopic life on Europa."

"Under Europa's crust is a layer of liquid. While the surface is frozen solid at between -160 and -220 degrees Celcius, heat generated by the pull of Jupiter's other moons keeps the subsurface ocean liquid."

"Lineae are fractures in Europa's crust that appear as dark red streaks on the smooth grey surface. The cause may be Europa's subsurface ocean rotating more slowly than its exterior layer because of the gravitational pull from Jupiter."

"Today, we call the four largest moons of Jupiter the Galilean Moons. But when Galileo first discovered them, he dubbed them the Medicean Moons after the powerful Medici family, who controlled Florence in the Renaissance."

"The next mission that humans send to Europa will be called the Europa Clipper. It will look for evidence of organic molecules under the moon's surface, which could make it a candidate for human colonization." 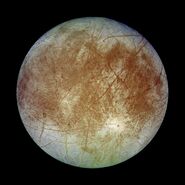