Global poll: to make this wiki as diverse as the Ukrainian one or not? (update)

Fungus Among Us is a limited time event which mainly focuses on Fungi. Like the Tech Tree of Life, this one features generators that produce its main currency per second, Toadstools. The event officially started on April 21st, 2022 (12 pm) and lasted until April 26th, 2022 (12 pm), but had several beta runs beforehand.

The Fungus Among Us event features eight generators which produce the currency for it.

"Fungi are small eukaryotic organisms that often live in soil or on decaying matter. There are nearly 145,000 known species of fungi, and scientists suspect there may be up to 5 million total"

"There are many different types of fungi in the world, all with different lifestyles and behaviors. How do fungi live, eat, grow, and reproduce?"

"Fungi are master decomposers and unsung heroes of recycling, creating new life out of death. How do fungi help clean up our world?"

Fungi of the Forest[]

"Deep in the soil, a "wood wide web" of fungi connects the inhabitants of the forest. How do plants and fungi work together?"

"Humans have learned to harness fungi for many uses, some ancient and some modern innovations. What can fungi do for us?"

"Whether you chomp into a portobello or nibble on a nice blue cheese, you're probably a fan of fungal foods. Where can we find fungi in the pantry and fridge?"

"In any kingdom as large as the fungi, you're guaranteed to find a few nasty characters. Which fungi can hurt you, and how?"

"Fungi have a surprising number of subtle and not-so-subtle ways to influence the minds and behaviors of more complex creatures. How do they do it, and why?"

"They're in the dirt, the water, and the air. They're in our homes, in our food, and even inside our bodies. They're entangled with just about every organism and ecosystem on Earth. There's a lot happening in this often-overlooked kingdom."

"The study of fungi is called mycology. While biologists once thought that fungi were in the same family as plants, they are actually more closely related to animals."

"Mushrooms are the spore-bearing, fruiting part of a fungus. They grow above ground and usually have a stem, cap, and gills, with colors ranging from drab to brilliant. Edible varieties are cultivated on farms or gathered in the wild by experienced foragers."

"Yeasts are an ancient family of single-celled fungi that reproduce trough budding. Some species of yeast are beneficial, aiding in processes like fermentation. Others are pathogens that can cause infections, like the insidious Candida."

"Molds are multicellular colonies of fungi that grow togetheras a mass of thin filaments. When this telltale layer of fuzz starts growing on food and breaking it down, a foul smell and a nasty taste follow—we call this "spoilage.""

"Fungi are heterotrophs, organisms that can't reproduce their own food. They must break down other organic matter to access nutrients, and they're very efficient at it. They can penetrate multiple layers of the tissue that they're feeding on."

"Fungi reproduce via many methods, both sexual and asexual, from budding to spore dispersal. In this huge and varied kingdom, there are no hard and fast rules for how new fungi are born."

"Since they don't have a stomach to digest food, fungi effectively use the outside world as their stomach—they secrete hydrolytic enzymes into the environment around them. These digestive juices break down large organic molecules so they can be absorbed as nutrients."

"Spores are individual cells containing genetic information, used in both sexual and asexual reproduction. Evolution has primed them to spread as far as possible and survive almost anything."

"Symbiosis is a mutually beneficial partnership between two organisms. Fungi are one of the most versatile symbionts on Earth, pairing with members of almost every other kingdom. Fungi form symbiotic relationships with algae, plants, insects, and even humans."

"Fungi are made up of long, cylindrical filaments called hyphae. They expand by branching, sprouting new growths off from an existing hyphae to create huge networks with many connections."

"Fungi are impressive omnivores, able to use almost anything as a food source. Some species can gobble up heavy metals, oil, and chemicals from contaminated water or soil. This is a process called bioremediation, used to fight pollution."

"In the depths of the Chernobyl Nuclear Power Plant, scientists have found evidence of new life: colonies of radiotrophic, or radiation-eating, fungi that live on radioactive material. They don't just survive here: they thrive."

"Fungi break dead organisms down into useful nutrients. Some are consumed by the fungus, and some are returned to the soil to help feed plants and animals."

"Environmentally conscious individuals may wish to forgo a coffin when they die. Instead, they might opt for a mushroom burial suit made from cotton and fungal spores. This method decomposes a body quickly and with little to the environment."

Fungi of the Forest Efficiency[]

"A myccorhiza is a symbiotic relationship between a fungus and a plant. The fungus connects with a plant through its root network, enriching the soil with nutrients and helping the plant survive tough conditions."

"Fungi connect to each other trough large, complex networks of hyphae. This mass, called the mycelium, can also mingle with plant roots, binding fungi and flora together. Organisms intertwined through the mycelial network can even communicate using chemicals and electrical signals."

"The rare, beautiful Eurasian ghost orchid lacks chlorophyll, so it can't perform photosynthesis. Instead, it relies on mycelial networks to bring it nutrients from other plants. This free rider is a particularly lovely parasite, living off the bounty of the forest."

"The mycelial networks of the forest form an organic information superhighway. When a broad bean plant is being eaten by aphids, it can send signals through the netwark to raise an alarm. Warned of the attack, neighboring plants release chemicals that attract wasps to prey on the aphids."

"Mycelium is extremely strong. When dried it is very durable, resistan to water, fire, and mold. Bricks made from sustainable mycelium are an experimental alternative to traditional building materials like concrete and wood."

"Toxic or parasitic fungi that target insects in the wild can be put to use as a biopesticide. Once the spores of these mushrooms land on an insect and infect it, they start growing from the inside out until the pest is destroyed."

"Fungi have been used in traditional medicine for thousands of years, but scientists are only beginning to understand the mechanisms that make them useful. Some fungi are used in cancer treatment, some can lower cholesterol, and some are immunosuppressants."

"Alexander Fleming discovered penicillin in 1928, when he noticed mold growing on an unattended petri dish. He observed how the fungus killed all the bacteria around it. Today there are many different classes of antibiotics, all derived from this one discovery."

"Edible mushrooms are a common ingredient in cuisine all over the world. From portobellos to maitakes, oysters to enokis, mushrooms are eaten on pizzas, in soups and stews, and on their own."

"Truffles have long been prized for their strong fragrance and rich flavor. Rare and diffcult to find—they grow underground and must be sniffed out by trained dogs or pigs—they fetch high prices on the culinary market."

"Given a mix of water and flour to feed on, yeasts convert sugars into ethanol and carbon dioxide bubbles that make bread dough light and puffy. This rising process is the key to baking many types of bread. The earliest records of this technique are from Ancient Egypt."

"Under oxygen-free conditions, yeasts and bacteria can convert carbohydrates to alcohols or other organic compounds. Humans have been harnessing this process to make bread, cheese, pickles, and alcoholic beverages for over 13,000 years."

"While most cheese is cured using bacteria, yeast can also be an important ingredient in the ripening process. Cheese like Limburger, Camembert, and Buffalo mozzarella use yeasts to achieve their distinctive texture and flavor."

"Blue cheese is a type of cheese that contains veins of mold. While the strong smell and tangy flavor can be an aquired taste, it's popular around the world. Roquefort, Gorgonzola, and Stilton are all blue cheeses."

"Yeast is an essential ingredient in winemaking and beer brewing. Once humanity mastered fermentation, it was quickly used to produce alcohol. Jugs thought to have been used for fermenting alcohol have been found dating back to the Stone Age."

"When food products are stored improperly or go uneaten for too long, mold will begin the work of decomposition, spoiling the food and rendering it inedible. If you're surprised by mold growing on your lunch, don't eat it!"

"Not all fungi are nice. Some can cause serious problems for their hosts, be they plants, insects, or humans."

"While many plants live in harmony with fungi, some are harmed by the association. Fungal infections are behind devastating crop blights, which cause famines and can threaten or wipe out entire species of plants."

"Black mold is rare in the wild but thrives in damp, poorly maintained buildings. Often discovered in houses that have suffered water damage, it's costly and difficult to remove. The airborne spores are toxic to humans and pets—if you see black mold, steer clear."

"Usually entering through the skin or the lungs, fungal infections in humans can be very serious. From athelete's foot fungus to itchy, painful Candida yeast infections to the chronic disease cocciciodomycosis, or Valley Fever, fungi are never welcome guests in the human body."

"In some situations, making yourself appealing to a predator can be as useful as trying to scare it away. Fungi have evolved mouthwatering smells and pleasant flavors so they will be eaten, cultivated, and spread across the globe."

"Some species of mushrooms can cause hallucinogenic side effects when eaten. Psilocybin mushrooms are consumed as part of spiritual rituals in many indigenous cultures. Medical researchers are experimenting with small doses of these mushrooms to treat ailments such as PTSD, depression, and alcoholism."

"The Cordyceps fungus is known for its bright orange, club-shaped mushrooms and for its ability to infect and hijack the bodies of ants and other insects. One especially gruesome species first induces its victim to climb to a high spot where its spores can be dispersed. Then the fungus consumes the ant alive, finally sprouting a spore-bearing stalk from the head of its corpse."

This event simulation holds some rewards already mentioned above. Three of those are the Bronze, Silver, and Gold Badges which have one effect on all other tech trees. Along the Gold Badge you will receive the James Webb Telescope which gets added to the Space Garden as well. All the Badges speed every simulation up by 1%, adding up to 2% when the Silver Badge is obtained, and lastly to 3% when the Gold Badge is achieved.

"Fungi usher the dead into the next world, dissolving the body and returning it to the Earth. Everything that lives is made of everything that has ever died—all of us are entwined together."

"The perfect slice of pizza wouldn't exist without fungi! Yeast to rise the dough and ripen the cheese, and a nice topping of button mushrooms—yum."

"An ant infected by the fungus Ophiocordyceps is like something out of a horror movie. By the time the hepless host dies, it's more fungus than insect." 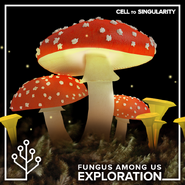 Announcement for the "Fungus Among Us" Event
Українська
Community content is available under CC-BY-SA unless otherwise noted.
Advertisement