Ganymede is the 13th Celestial Body and the 4th Moon obtained in The Beyond Bubble Universe, which can generate Stardust.

"Ganymede is not only the largest Galilean moon, but also the largest moon in the entire solar system bigger even than the planet Mercury. It ha a thin oxygen atmosphere and its own magnetic field."

"Ganymede is the only moon known to have a magnetic field. Although the field is small and relatively weak, it still makes Ganymede unique among the moons in our solar system."

"Like Earth, Ganymede has polar ice caps. Intense particle bombardment through the atmosphere creates a terrain of water frost at the moon's north and south poles."

"Simon Marius, a German astronomer, claimed to have observed Jupiter's moons a month before Galileo. This may have been true, but Galileo documented and published his findings first, and so is credited with the discovery."

"Ganymede is the largest moon in our solar system. Its mass and diameter alone would classify it as a planet if it orbited the Sun instead of Jupiter. It is likely that it formed from gas and dust left over from Jupiter's creation." 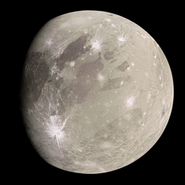