Cell to Singularity Wiki
Register
Don't have an account?
Sign In
Advertisement
in: Beyond, Celestial Body, Comet, Stardust-Generator
English

Comet Hale–Bopp (cometary designation: C/1995 O1) is the 24th Celestial Body and the 3rd Comet obtained in The Beyond Bubble Universe, which can generate Stardust.

The orbit Hale-Bopp follows in the game is not the same as the real one, since its perihelion (closest approach to the Sun) sits at around 0.9 AU (Astronomical Units), which is still inside the inner solar system. The closest point to the Sun in Cell to Singularity is way beyond Neptune.

"Comet Hale-Bopp was visible with the naked eye for a record-breaking 18 months in 1996 1997. It was one of the brightest comets ever seen by humans, and the most widely observed comet in the 20th century."

"Comet Hale Bopp was one of the brightest comets seen in centuries when it reached its perihelion (the point in its orbit closest to the Sun) in 1997. It was so bright it could be seen even in daytime."

"Astronomers had known for some time that comets had two tails, one made of dust and the other of gas. They discovered a third tail, made of sodium, when observing comet Hale Bopp."

"Comets are small, icy bodies that orbit the Sun and are sometimes visible from Earth. As they get closer to the Sun, the Sun's heat causes them to release gases that form a cloudy aura or tail."

"Maybe once every decade, an unusually bright comet will appear in the night sky. Throughout history, these rare astronomical events have been called Great Comets. Humans once considered them omens of important events to come."

"While observing Comet Hale Bopp, an amateur astronomer incorrectly identified the star SAO1411894 as an unidentified flying object in the comet's wake. This led many conspiracy theorists to conclude that the comet foretold the coming of aliens." 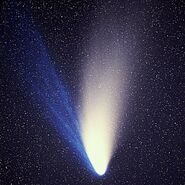 The comet as soon from Earth. The photograph was taken in 1997 by Philipp Salzgeber