The Heliosphere is the 29th Celestial Body and the 2nd "Star" obtained in The Beyond Bubble Universe, which can generate Stardust.

"The heliosphere is the region in space that surrounds the Sun. It is continuously inflated by solar wind and protects the solar system from cosmic rays. Its outermost region, the heliopause, is the boundary between our solar system and interstellar space."

"A shockwave caused by the meeting of subsonic-speed solar winds and the interstellar medium, termination shock occurs at the very edge of the heliosphere. The first man-made object to cross this border was Voyager 1 in 2004."

"The heliopause is the last boundary between the heliosphere and interstellar space. Her, Sol's solar winds finally give out, pushed back by the opposing force of solar wind from other stars in the galaxy."

The Heliosphere's Astronomy Mission is its region beyond the termination shock, the Heliosheath.

The Heliosphere is structured and divided into nine parts, the solar wind, heliospheric current sheet, outer structure, termination shock, heliosheath, heliopause, heliotail, hydrogen wall, and the bow shock. Of these nine, one/two is/are present in the game. This includes the Heliosheath and the Heliopause. These are not visible in the Space Garden.

"The part of the heliosphere past the termination shock, the heliosheath is the area where magnetic bubbles, slow interstellar winds, and compression cause turbulence in space. It is located 80-100 AUs away from the Sun." 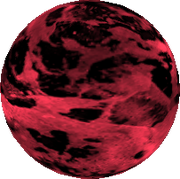 "Voyager 1 was the first human-made spacecraft to reach the termination shock. Initially launched in 1977, it took 27 years for it to reach this boundary. As of 2021, Voyager 1 has operated for 43 years and still sends data back to NASA."

"There is a field of astronomy that just studies the heliosphere. Scientists who study heliophysics are working to learn more about the weather and climate of space, as well as the effects of the solar winds."

Overview Image of the Heliosphere[]