Triton is the 20th Celestial Body and the 8th Moon obtained in The Beyond Bubble Universe, which can generate Stardust.

"Triton is the largest moon of Neptune and one of the solar system's few geologically active moons. It may once have been a dwarf planet in the Kuiper Belt before being captured by Neptune's orbit."

"Triton is the only known moon with a retrograde orbit, orbiting in the opposite direction to its host planet, Neptune. Scientists believe that it may once have been a dwarf planet captured by Neptune's gravity."

"Triton orbits Neptune in an almost perfect circle, but it is believed that Triton's orbit will decay one day. When that happens, Triton wil either collide with Neptune or break up in the planet's atmosphere, and the debris will form a new ring system."

"Triton has many geological similarities to Pluto. Its retrograde orbit leads astronomers to believe that it may have been a Kuiper Belt dwarf planet captured by Neptune's gravity."

"Triton is so cold that most of its atmospheric nitrogen has turned to frost. Because of this, the moon has a high albedo—the icy coating reflects sunlight and gives Triton its bright sheen." 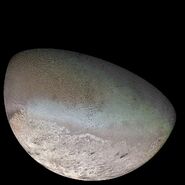